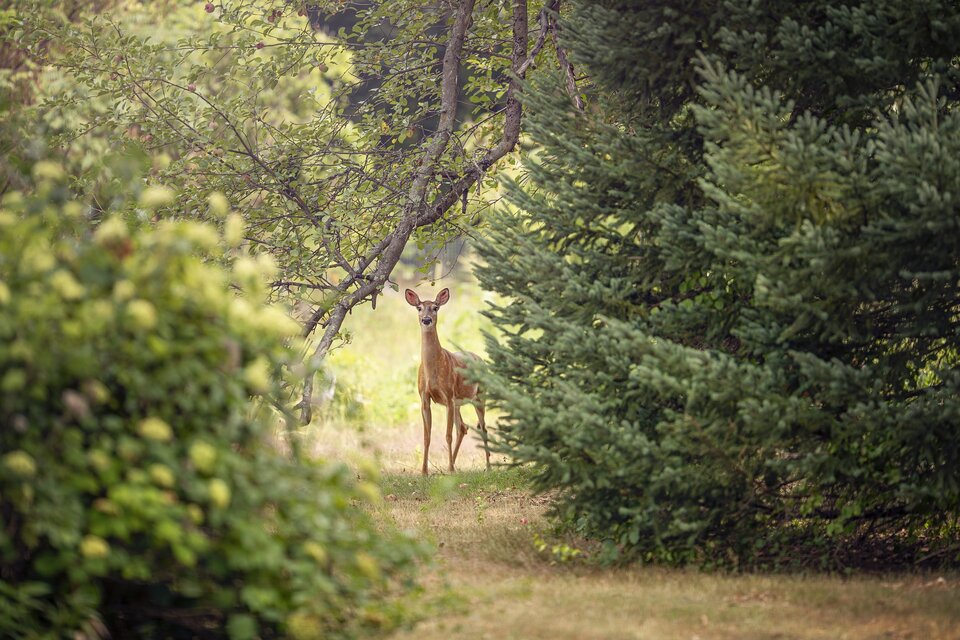 Most love the sight of a deer leaping and gallivanting about in the flower-covered meadows, but when it comes to your irises or other garden plants, they can become quite the nuisance. Many of the plants in the garden turn into a deer’s all-you-can-eat buffet. You look one morning to find that your irises were eaten clean off and wonder about the greedy culprit. Do deer eat irises?

Most of the time, they go after the bearded irises that weren’t planted by seed. Unfortunately, deer will target most plants, and you have few that they won’t eat. For those who planted bearded irises, they can call themselves lucky because this is one of those plants that they don’t usually eat unless forced to it.

Once the food sources grow scarcer, everything is up for grabs—even the bearded irises.

You could consider yourself lucky indeed if you never had a deer come in and eat the buds of your irises. This animal is well known as a garden grazer. In many cases, they will destroy your garden if you don’t put them in check. You have different products that you can buy to keep them away.

Along with bearded irises, deer dislike the taste of Japanese irises, and they will usually avoid them. This is because of how Japanese irises have grass-like leaves, and deer don’t like them. German irises are another type of iris that the deer won’t go after. They dislike this one because of the tough leaves on it.

You may find this information helpful if you live in an area full of deer. Instead of planting regular irises, you might try to plant Japanese, German or bearded irises to stop the deer from grazing them down. Most gardeners when dealing with deer will simply swallow hard and keep moving forward.

The deer will usually avoid Siberian irises except in extreme circumstances. You can trust that they needed it badly if they ate them. They dislike the bitter flavor and the strong fragrance of Siberian irises. For someone looking for deer-resistant irises, this makes for an awesome choice.

How to Keep Deer Away from Your Irises

In some regions of the United States, gardeners report that the deer have no qualms about eating the irises to the ground. How do you keep the deer away if they have taken a liking to your irises? I would recommend American Heritage Industries 16 oz Coyote Urine. Now, this may not work every time, but you don’t have anything that will keep the deer away 100 percent of the time. Keep experimenting to see what works and switch between a couple of strategies that work.

Black mesh deer netting is another strategy that works, but you will need to make it at least seven feet high to keep the deer out of it 100 percent of the time. You may still struggle with other critters in the garden. The deer and other creatures will often figure out ways around your strategy as many disheartened gardeners have reported.

Try to mix undesirable plants like the bearded and Japanese irises with the more desirable plants to keep the deer away. Many deer will avoid the area to keep from biting into a plant that they dislike. Tulips give you an example of another plant that the deer dislike. You can protect your cucumbers and tomatoes by keeping them near the tulips.

I would recommend this strategy, especially with vegetables since deer love to go after vegetables.

Believe it or not, even simple windchimes can do the trick to scare the deer out of your garden. They dislike anything unfamiliar to them since they are animals of prey.

Are All Irises Deer Resistant?

Most irises are deer resistant on some level, but they will go after some types more when starving. It may depend on the region as well because some gardeners report the deer as eating their irises despite their best efforts to keep them away. Most deer avoid them because these plants are either toxic or taste bad.

Once they become hungry, all bets are off, and they will eat anything. The biggest reason that deer avoid a plant comes down to it being poisonous. Strong scents put deer off as well, and you might use it as a way to keep the deer away. Along with Siberian irises, deer will usually avoid peonies and lavender for the same reason.

Most animals have a stronger sense of smell than humans, and the overwhelming aroma can be off-putting to them. With that in mind, they will target your garden if hungry enough regardless.

In some cases, even a toxic plant won’t keep a deer from eating it. For example, poppies, foxgloves and daffodils pose a threat to deer when eaten, but they will usually only feel uncomfortable and nauseous. They don’t always die if they eat them. In general, they avoid them because of their toxic properties. You could say that even when starving, they won’t eat them unless it becomes a matter of life and death.

When to Exercise the Most Caution

The deer will especially target your plants in the first few weeks of growth. When you first plant them, the high nitrogen levels in the plants will make them particularly vulnerable because of a decreased resistance. Given half a chance, the deer will target them, especially during this time as will other animals looking for food.

It depends on the region, but in most cases, gardeners rank deer close to or at the top as a garden pest. They will utterly destroy some plants. This is why it may make sense to plant some bearded irises, Japanese irises or plants in general that they dislike. You will want to use a multi-layered approach to keep them from attacking your garden.

You may spray deterrent on the garden, but in many cases, the deer will adjust to it. It works at first until the deer learn how to adapt to it. In addition, a desperate deer will eat regardless of the consequences. They will eat almost anything.

To lower the risk that it won’t work, you will want to rotate between different products that worked in the past. Don’t overuse one because they can eventually adapt to it.

Use a Motion Sensor Sprinkler System

Having a motion sensor sprinkler system, they will often combine sound, motion and water to scare away the deer from your garden. Not only will it scare off deer, but it can scare away other animals, such as:

A motion sensor sprinkler system protects your garden in a humane way because it will send the deer running from the garden. You will want to buy one with day and night protection since you never know when the deer will strike. I would recommend the Orbit 62100 Yard Enforcer since it gives you one of the few choices that protect your garden day and night.

Are Irises Poisonous to Deer?

Some irises such as the purple iris is toxic to deer, which explains why they avoid it. Deer usually try to avoid eating anything poisonous unless desperate. Just because a plant is poisonous doesn’t necessarily mean that it will kill the deer, however. In many cases, it will simply give the deer an upset stomach and cause enough discomfort to make them avoid those plants.

Irises cause tissue irritation when consumed or handled. When ingested, the deer may experience drooling, vomiting, diarrhea or fatigue. While rarely a fatal poisoning in deer, the flower may still cause harm if it ingests it. Even touching an iris can cause poisoning, which explains why most deer avoid the flowers altogether. Irises can also be poisonous to dogs and cats, so you may want to think twice about planting them if you have pets.

Things That Attract Deer to the Garden

Nothing, not even your irises, will be safe if you overstock your garden with tasty plants that they love. Generally, they won’t target your irises, but if you have enough deer around, one or two of them may nibble on your prized flowers. To eliminate the risk and protect all the plants in your garden, you may want to limit some of the plants that attract them, such as:

Deer will often target fruit trees as well. For example, they love to eat apple trees. Having too many of these things around can bring a bunch of deer into your garden. If you struggle with deer eating your plants, you may want to first look at the things that attract them.

The only thing that will 100-percent work every time in keeping the deer out of your garden is to make electric fencing. Then they won’t bother your irises or anything else. For those who live in rural areas of the country, they may find electric fencing to be a great choice. In the city, you have to be careful because you can only put electric fencing up in certain ways and it depends on the city.

Generally, it can’t be anywhere near where the public might accidentally touch it, but you need to look at your own local laws.

Deer will eat irises, but they usually don’t target them because they like other plants better and some varieties of irises are poisonous to them. If you see a deer that ate your irises, you can usually trust that it was starving. In some cases, you have many deer around, and this can make it more common that they would eat the irises.

If you wonder about the other animals that might eat your irises, check out the article that I wrote here called, “What Animals Eat Irises?”